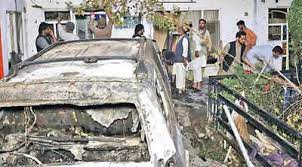 Looks like our Forever War isn’t really over, even after the chaotic and terribly bungled withdrawal of the last US troops from Afghanistan. President Biden has said that we retain a strong “over the horizon” capability in the region to defend our interests and attack terrorists who are planning harm to America and Americans.
That term—over the horizon—refers, in part, to our fleet of aerial drones armed with bombs, air-to-air missiles, and rockets. The pilots of these drones are often stationed at Creech Air Force Base near Las Vegas, Nevada. They drive to work, park their cars, and then step inside to operate drones more than 7,000 miles away over Afghanistan, Pakistan, Yemen, Somalia, and who-knows-where-else. These pilots can fire missiles at vehicles and buildings on the ground to kill people and then drive home for dinner with their families. (Think about that for a second—they can kill people from thousands of miles away with the push of a button and then get back in their cars and drive home to see their kids. “Hi Mommy! How was work today!?”)
The United States has been using drones in this way since the 2001 invasion of Afghanistan, where Predator drones carrying anti-tank missiles were operated by the CIA. You can see why drone warfare is attractive to US Presidents. Drone surveillance and attacks can be carried out from a distance, without need for ground troops, special ops forces, or CIA operatives to be in-country and in danger. Americans don’t like when our soldiers are killed in faraway places during military engagements that don’t seem to have a clear purpose.
The reaction to tens of thousands of US troops dying in Vietnam and the growing disillusionment with the Forever War in Afghanistan make it evident that these sorts of sacrifices of US lives for unclear goals are not supported by a large percentage of the US population.
President Obama understood this and ramped up the US drone war exponentially compared to George Bush’s use of drones. Obama ordered ten times as many counterterrorism strikes as his predecessor. Many of these strikes were in countries the US was not at war with—Yemen, Pakistan, and Somalia.
Can you imagine the uproar there would be in America if China were to start launching drone attacks in Afghanistan or Nepal or Thailand in the name of their national security? We would call them savage attacks and decry the inevitable killing of civilians.
Policymakers like to describe these drone attacks as “surgical,” “precise,” and “targeted.” Generals and Presidents will sometimes take to a microphone to lament the sad loss of innocent lives that is inevitable when these sorts of attacks are launched. Military leaders use the term “collateral damage” to describe the terrible deaths and maimings of unintended victims of these attacks. But in the very next breath they will talk about the threat posed by the intended victim, as if that justifies the loss of innocent lives.
The Bureau of Investigative Journalism estimates that between 2010 and 2020 there were more than 14,000 confirmed US drone strikes around the world. Those strikes have killed somewhere between 1000 and 2300 civilians in addition to the roughly 10,000 enemy combatants. (The numbers are hard to narrow down, since the US rarely confirms anything to do with these attacks.)
Best estimates are that at least 300 children have been killed by US drones since 2010.
This all came to mind today as we mourn on the 20th anniversary of the 9/11 attacks on innocent US civilians simply going about their lives on that clear September morning. It was shocking—both the audacity of the plan and the fact that civilians were targeted. It lit a righteous (and justified) desire for revenge.
Alongside the remembrances of 9/11, I saw in the paper today a report that the people killed in the US drone attack outside of Kabul Airport a few weeks ago were most likely NOT carrying explosives. It somehow seems fitting that the final missile launched in the 20-year US war in Afghanistan targeted a man—Zemari Ahmadi--who worked for a US aid group. He had placed canisters of water in his trunk to bring to his family. His car was hit by a missile launched from a Reaper drone, killing the driver and ten others in the vicinity. Seven of those ten were children.
If you are an American and the loss of close to 3000 people on 9/11 makes you angry, think of how the people in Yemen, Pakistan, Somalia, and Afghanistan must feel when their neighbors and children are killed by US drone strikes.
Four US Presidents have made the calculated decision to rely on drones to do the dirty work of war. And in so doing they have killed hundreds of civilians. George W. Bush, Barack Obama, Donald Trump and Joe Biden have launched thousands of attacks killing hundreds of civilians. To me, all four men are war criminals.
We like to see ourselves as a beacon on a hill, a shining example, a nation with the moral authority to lead the world. And at our best we are all these things.
The Drone War is us at our worst. It kills innocents, it fosters hatred for America in the non-combatant populations of these countries, and it does terrible moral injury to the pilots of these drones back in Nevada. We as a nation are asking them to do our dirty work and just keep it to themselves. We don’t want to see the blood on our hands and four US Presidents have gone along with the ruse.
On this twentieth anniversary of 9/11, while I mourn the dead in the World Trade Center towers and in the Pentagon and on Flight 93, it is clear that we need to stop. We need to stop raining death down on civilians. We know what it feels like and it is simply time to stop.
Posted by chris at 9/11/2021 No comments: 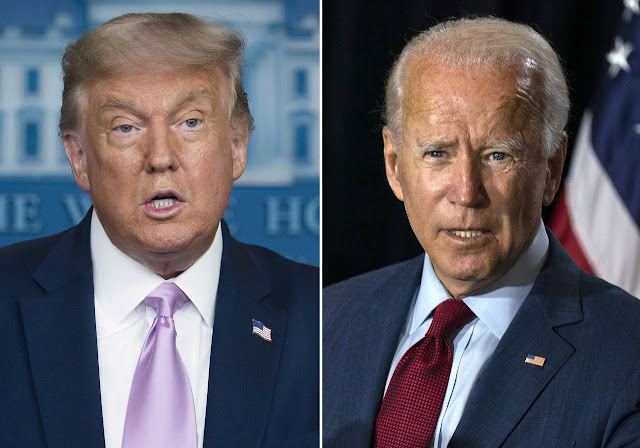 It is not hyperbole to say that November’s Presidential Election in the United States is the most consequential election we have had in many years. Some people might argue that 2016 was more consequential, but I disagree. In 2016, we could still hope that maybe the Office of the President would work some magic on Donald Trump---that he would come to understand the importance of empathy and kindness and compromise and expertise and actual leadership.

Sadly, rather than the Office magically changing Donald Trump for the better, his presence has tainted the Office and done actual long-term damage to the country. He has shown himself to be singularly unqualified to be President. To him, everything is about raw power. To Donald Trump, you do something simply because you can, not because it is right thing to do. He is a crude, small person with mean instincts, little curiosity, and no heart.

Now that we have all seen who he is, with no room left for interpretation or spin, this November’s election has become a referendum on the soul of America. It will answer the question: What kind of a country are we?

To choose four more years of uninformed and destructive policies, belittling language, craven kissing up to dictators, personal enrichment, and the politics of chaos would tell me that America is dead. We would no longer be the country I was proud to represent as a Peace Corps Volunteer in Yemen.

If you have watched the past four years and you are satisfied with the job Donald Trump has done, then I cannot change your mind. All I can ask of you is that you stay home on Election Day.

If, however, you are eligible to vote and are thinking about voting for someone other than Joe Biden or Donald Trump—or not voting at all---please read the next few paragraphs.

Because the future of our country is at stake. If you are thinking about not voting, PLEASE PLEASE PLEASE think again. There are many people whose lives will be worse if Donald Trump wins. And by “worse” I don’t mean that their taxes might be a little higher or that there might be some policy changes that make life a little bit harder for them. I mean worse as in they will feel unsafe. I know many Trump fans like to make fun of people’s feelings, but by “unsafe” I mean truly at risk for maltreatment and harm. They will feel like the country they live in actively dislikes them and wants to hurt them. And they would be right.

It is no exaggeration to say that we are on the brink of fascism in this country. Donald Trump is a wannabe strongman who thinks the way to be a good leader is to force your will on anyone who will not do what you want them to do. He is ignorant of American history, has no idea what the Constitution actually says, and seems to believe a President should be able to do whatever he wants to do.

This is why he sides with bad cops when they abuse their power. You can hear the wheels turning in his head—“If those people had just done what they were told to do, they’d be fine.” This is the argument of people who can expect to be treated fairly by the system. Many people in the United States today have no expectation of fairness from the system—and they are smart to feel this way. The deck is stacked in this country against the poor, against the gay, against the person with an accent, against people with dark skin, against anyone who makes the white power structure feel threatened.

If you are thinking of not voting, please reconsider and think about the people who need your support and your protection. With the small effort it would take to go and vote for Joe Biden, you can help protect people who, through no fault of their own, are at risk in a second Trump term. You don’t even have to go anywhere to vote. You can do it from home with a mail-in ballot. PLEASE think about this as you decide whether to vote.

If you are thinking about voting for someone other than Joe Biden or Donald Trump---especially if you live in Michigan, Wisconsin, Pennsylvania, Ohio, Florida, North Carolina, Arizona, or Iowa---PLEASE hear me out. I have to be blunt because this really matters: your philosophical purity is less important than your Black neighbor’s life. It really is. So please consider voting for Joe Biden instead of anyone else. I know it feels wrong and maybe even painful to vote for someone as corporatist and middle-of-the-road as Joe Biden, but, if you are white and leaning third party, please understand that this particular election IS NOT ABOUT YOU.

This is the election where you get to prove that other people’s lives matter by voting as if their lives depend on it. Because they just might.

The Murder of Ahmaud Arbery